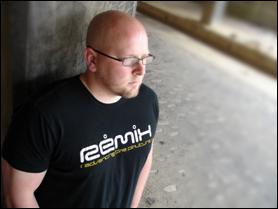 The often imitated but never duplicated…Justin Hand, with 30+ years behind the decks from coast to coast and multiple international performances, he is not only an early pioneer of the Memphis scene but also a well kept secret in its dance movement. Hand’s background in music, from his youth, born in Memphis soul, funk and blues combined with his involvement in the early years of the dance/rave scene give him a competitive edge to most. Over the years he has honed his mixing skills to a robotic-like precision, giving him a unique ability to flow from style to style all while keeping the dance floor packed and energized.

This display of skill and talent earned him two residencies, while living in Chicago, at the legendary Red No. 5 and Big Wig while supporting some of the hottest acts to grace the US. It is no surprise he has been invited to perform alongside some of the most sought after North American tours in the industry; with djs and live acts such as Young American Primitive, Crystal Method, Rabbit in the Moon, Carl Cox, John Selway, Cari Lekebusch, Marco Carola, Dj Hell, Frankie Bones, Dj Dan, Alexi Delano and many many more.

Justin Hand was also founder and station manager of LFORADIO. A pure 24/7 internet dance music station for it’s 7 year run which was host to djs all over the US including djs from the UK and Australia. The station allowed him to give himself and others world wide exposure and offer a launchpad to those djs he saw as game changers on the forefront of the music scene. He still continues his exploration to find new ways to introduce music to the masses. Currently he is taking advantage of custom streaming technology to broadcast live video feeds under the EXILE moniker on E (exile) TV (https://exiledjs.com) with his partner Mike McConnell. Using this platform, he is able to focus on techno as well as showcasing techno centric guests, keeping the techno vibe alive and well.

This impressive repertoire, love for the music, and pursuit of new avenues for inspiration put Justin on the forefront of the Electronic Dance community. Most say he made a name for himself from his love of techno but it’s his skills to manipulate, navigate and blend other styles that earn him respect from crowds and DJs around the world. From techno funk to deep and sexy house, he has got it all. After more than 3 decades with headphones on, most call him a seasoned veteran, he would say that he’s just getting started.